Seeing Complexity in Public Education: Problems, Possibilities, and Success for All

In a period of unprecedented pressure to reform education in the United States, two questions stand out: What is involved in the work of transforming underperforming schools into higher performing schools? And what makes this work so difficult?

Seeing Complexity in Public Education examines these questions in light of the history of the Success for All Foundation, an organization that has collaborated with thousands of elementary schools across the US to enact a common design for comprehensive school reform, all in the effort to improve the reading achievement of millions of students. This story of Success for All spans a long and turbulent period, beginning in 1987, with the strategy of improving reading achievement by improving students’ cooperative learning in classrooms, and stretching through 2008, with efforts to influence federal policy to support that strategy.

There is nothing in the story of Success for All to suggest that schools can be improved through silver bullets, stump speeches, or passionate debate. Rather, the theme that emerges from the story of Success for All is that the problems and possibilities of effective, large-scale, and sustainable education reform lie in the complexity of public education – in the interactions among underperforming schools, programs of reform, the organizations that advance those programs, and the environments in which they operate.

The story of Success for All is sobering, in that it locates first order problems of education reform not in the schools that need to improve, but instead, in the many reformers so determined to improve them. By tracing Success for All’s deep push into the full world of US public education, this book assists both populist and professional reformers in seeing, understanding, and ultimately confronting its complexity. 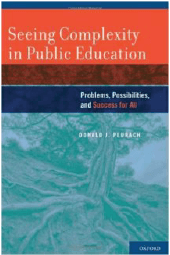