The Engaged Scholar: Expanding the Impact of Academic Research in Today’s World

Society and democracy are ever threatened by the fall of fact. Rigorous analysis of facts, the hard boundary between truth and opinion, and fidelity to reputable sources of factual information are all in alarming decline. A 2018 report published by the RAND Corporation labeled this problem “truth decay” and Andrew J. Hoffman lays the challenge of fixing it at the door of the academy. But, as he points out, academia is prevented from carrying this out due to its own existential crisis—a crisis of relevance. Scholarship rarely moves very far beyond the walls of the academy and is certainly not accessing the primarily civic spaces it needs to reach in order to mitigate truth corruption.

In this brief but compelling book, Hoffman draws upon existing literature and personal experience to bring attention to the problem of academic insularity—where it comes from and where, if left to grow unchecked, it will go—and argues for the emergence of a more publicly and politically engaged scholar. This book is a call to make that path toward public engagement more acceptable and legitimate for those who do it; to enlarge the tent to be inclusive of multiple ways that one enacts the role of academic scholar in today’s world. 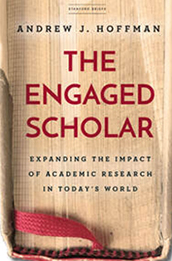