Coach John Beilein on the team in leadership

This is a virtual event.

Free and open to the public. 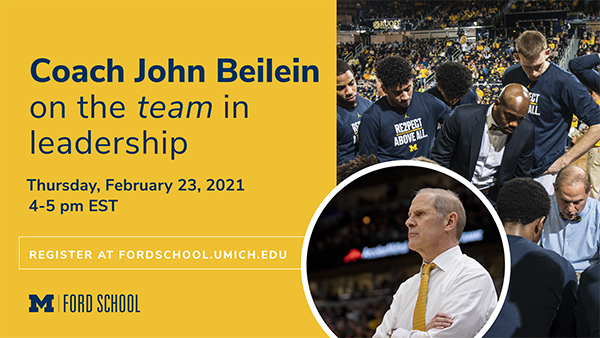 Coach John Beilein on the team in leadership

Presented by the Gerald R. Ford School of Public Policy

Join the Ford School for a discussion on leadership featuring Coach John Beilein and Professor Paula Lantz, associate dean of the Ford School. Their conversation will focus on the importance of teams and leadership: how we can build teams, what makes for an effective team, dealing with conflict within a team, and more.

From the speaker’s bio

A proven winner throughout his career, Beilein has won 754 games at four-year universities and 843 games altogether, including his time at the Cavaliers and at the junior college level. Beilein recorded a 20-win season at four different levels—junior college, NAIA, NCAA Division II and NCAA Division I.

Beilein played college basketball at Wheeling College (now Wheeling Jesuit University) from 1971-75 and served as team captain during his junior season. He received a bachelor’s degree in history from there in 1975 and earned a master’s degree in education from Niagara in 1981.