Eudaimonia in work and family life: Findings and reflections 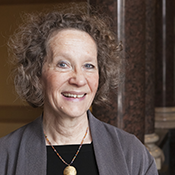 Eudaimonia is a type of well-being that emphasizes self-realization (making the most of personal talents and capacities) and purposeful/meaningful life engagement. Growing evidence links these qualities to better health and extended longevity. How work and family life (and the interplay between the two) matter for eudaimonia will be examined. A key reflection is the need to better understand how work experience nurtures or undermines eudaimonia.

Carol D. Ryff, PhD, is Director of the Institute on Aging and Hilldale Professor of Psychology at the University of Wisconsin-Madison. Her research centers on the study of psychological well-being, an area in which she has developed multidimensional assessment scales that have been translated to more than 30 different languages and are used in research across diverse scientific fields.

More than 500 publications have been generated using her scales of well-being. Investigations by Ryff and colleagues have addressed how psychological well-being varies by age, gender, socioeconomic status, ethnic/minority status, and cultural context as well as by the experiences, challenges, and transitions individuals confront as they age.

Whether psychological well-being is protective of good physical health is also a major interest, with ongoing longitudinal investigations linking positive psychosocial factors to a wide array of biomarkers (neuroendocrine, immune, cardiovascular) as well as to neural circuitry. A guiding theme in much of this inquiry is human resilience – i.e., how some individuals are able to maintain, or regain, their well-being in the face of significant life challenge and what neurobiology underlies this capacity.

Ryff has generated over 200 publications in the areas described above, and she currently directs the MIDUS (Midlife in the U.S.) longitudinal study, which is based on a large national sample of Americans, including twins. Funded by the National Institute on Aging, MIDUS has become a major forum for studying health and aging as an integrated biopsychosocial process. She is also Principal Investigator of MIDJA (Midlife in Japan), a parallel to the MIDUS investigation, for which she received an NIH Merit Award.