The United States is not the polarized, angry nation one might think, based on the tenor of its politics. The surprising truth about Americans is that they are united by ten core values, says University of Michigan sociologist Dr. Wayne Baker in his new book United America (Read the Spirit Books, January 2014). Based on years of nonpartisan, scientifically balanced polling and research, Dr. Baker’s conclusions can help the country rise above Washington gridlock, Red/Blue state stereotyping, and the culture war rhetoric.

“We assume that public conflicts and the ill-tempered rhetoric of our political leaders mean that most Americans are just as hostile and divided,” says Dr. Baker. Americans themselves are not polarized on values, as his research confirms. He defines a “Core American Value” as one that is strongly held by a large majority of Americans, stable over time, and shared across diverse demographic, religious and political lines. Among the ten such values that Dr. Baker identifies in United America are:

•Respect for Others: Though many cite a lack of consideration for others as the top reason for moral decline in America, the overwhelming majority of Americans put a high premium on respect, and also kindness, which is America’s number one character strength.

•Equal Opportunity: Americans believe strongly in equal opportunity—90 percent of Americans endorse this value. This brings up the question of equal opportunity versus equal outcomes. Dr. Baker examines the complexities of race and identity, economic justice, marriage equality, and the plight of returning veterans, America’s newest “minority.” He also explores the legacy of Dr. Martin Luther King, Jr., and the civil rights movement.

•Freedom: A founding ideal for the United States, freedom is not an abstraction for most Americans, but a set of values learned early in life. Dr. Baker examines the idea of freedom in American life in three areas: car culture, the right to work, and populist movements such as the Tea Party.

•Security: Americans place a premium on national security, but it competes with other core American values such as freedom and respect for others. Dr. Baker looks at how this value plays out in homeland security since the 9/11 terrorist attacks, defense spending, immigration reform, and congressional hearings on the “radicalization” of American Muslims.

•Self-Reliance and Individualism: Another value that has been part of the American national identity since the founding, self-reliance must be balanced with community, Dr. Baker says. He explores how individualism informs one’s sense of right and wrong, and the paradoxical relationship of self-reliance and security. 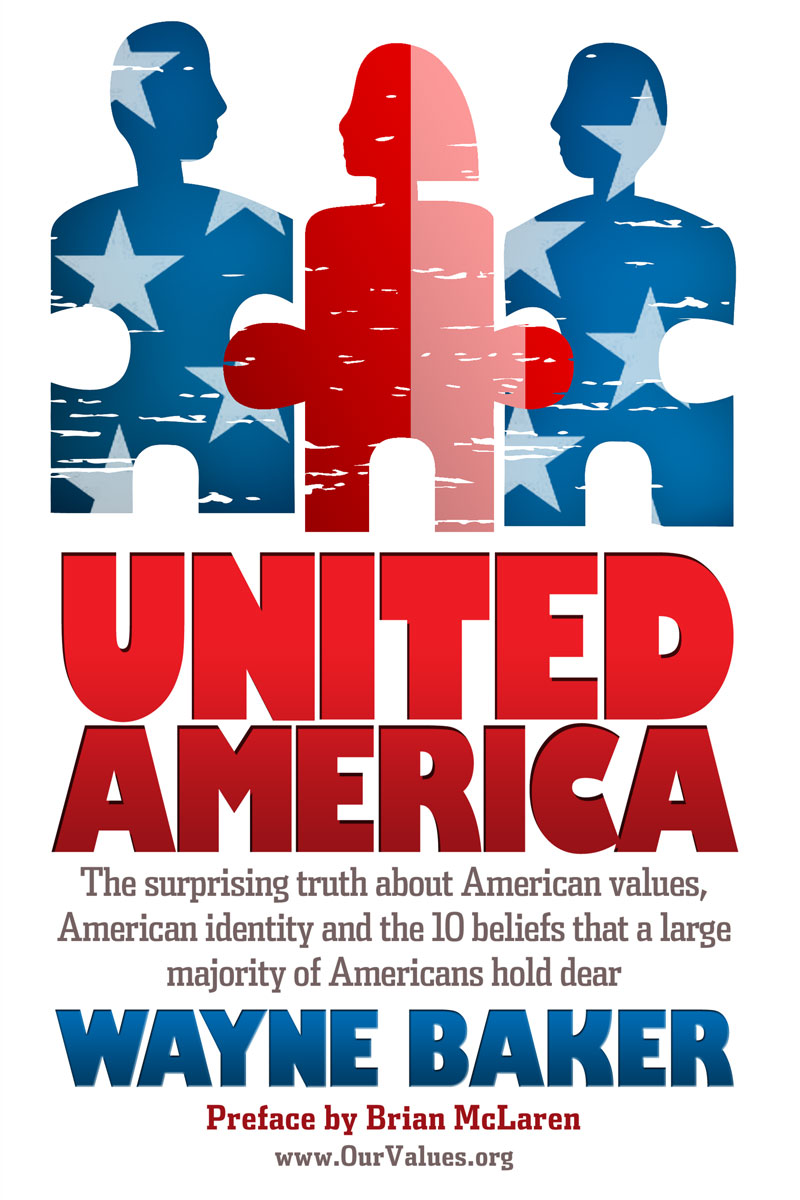 Other core American values include getting ahead—a “moral mandate” in America; justice and fairness; symbolic patriotism, emotional attachment to symbols such as the flag and anthem; and critical patriotism, opposition to American policies by citizens who love the country and want it to live up to its high ideals, and the pursuit of happiness.

“American values are high ideals and many times we don’t live up to them.” Dr. Baker writes. “The realities of American society can be at odds with core values.” He shows that this is especially true in areas of equality. America is the world leader in inequality, with the gap between the rich and poor growing faster here than anywhere else.

“Failure to achieve these values should not discourage us, but rather motivate us to strive even harder to realize them.” The ten core American values identified in United America are “common ground on which Americans can build, improve, and sustain the nation,” Dr. Baker says.

United America is based on four national research surveys of American values conducted by Dr. Baker in 2009 and 2010, administered by the Survey Research Center at the University of Michigan’s Institute for Social Research (ISR), for Social Research ISR, funded in part by the Carnegie Corporation of New York and ISR.

Wayne Baker is Chair of the Management & Organizations area at the University of Michigan Ross School of Business, Robert P. Thome Professor of Business Administration, and Professor of Management & Organizations. He is also Professor of Sociology at Michigan, and Faculty Associate at the Institute for Social Research. Dr. Baker has published over sixty academic articles and five books, including America’s Crisis of Values: Reality and Perception (Princeton University Press). He blogs five days a week at www.OurValues.org, an online experiment in civil dialog. Dr. Baker resides in Ann Arbor with his wife Cheryl and their son.