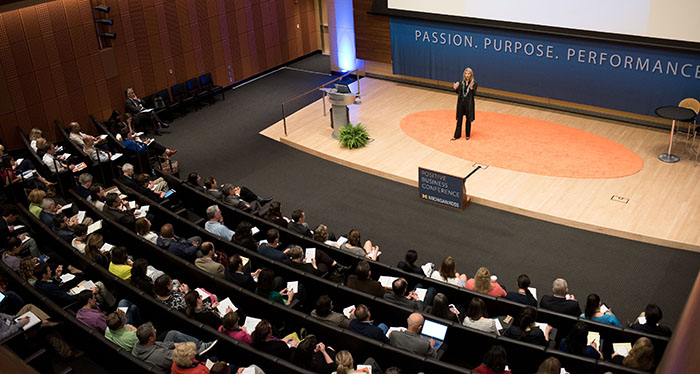 When accounting and consulting giant PwC defined a purpose statement — “build trust in society and solve important problems” — it sent it via email to employees.

That didn’t work so well, said Shannon Schuyler, BA ‘93, principal and chief purpose officer for the firm. Instead, PwC found that it takes work and thinking differently to show 200,000-plus employees worldwide how their roles connect with a company’s higher purpose.

Schuyler was one of about 370 business leaders — including executives from Google, Kellogg Co., and Patagonia — and academics sharing experiences, research, and best practices at the 2016 Positive Business Conference at Michigan Ross.

The goal of the conference, now in its third year,  is to spread the best ways for business to be a positive force in the world. That means ensuring business creates economic value, creates great places to work, and is a good neighbor in the community.

Schuyler says at PwC that means helping clients prepare for and solve some of the world’s biggest challenges — such as climate change, rapid urbanization, and technological shifts — and making sure their 224,000 worldwide employees see how they connect to that higher purpose.

Like with many organizations, it’s a work in progress, but a rewarding one.

Employees are saying “help me understand my position within this company and within the world and making it better,” she says. “That’s a tall order. That’s an individual conversation. But as we do that people are organically taking pieces and connecting it to their work in ways we haven’t thought of before. For example, we started a food security practice. We never had that.”

The results are there

While positive business practices are a growing part of corporate culture, there are some skeptics who see only cost and few benefits. Several at the conference showed proof that positive business drives bottom-line results.

“It fosters sustained organizational effectiveness,” she said. “From a business case perspective people who are flourishing have more resources and more capability to be effective.”

Alex Edmans, professor of finance at London Business School, said the traditional view is that if business looks after profit only, the rest will fall into place. By focusing on profits a company is forced to care about customers and workers or nobody will buy their products, and nobody will want to work for them.

But that assumes you can calculate the effect of positive business on your company. Turns out it’s difficult, but his research shows that companies with higher employee well-being delivered stock returns 2-3 percent higher than those that didn’t from 1984-2011. Companies with higher customer satisfaction ratings also outperform lower-rated peers.

That means companies “can pursue positive business for intrinsic and not instrumental value,” Edmans says. “Even though high profits were not the reason for treating workers and customers better, they manifest anyway.”

If the results are there, why aren’t more practicing positive business?

“It’s really hard,” says Susan Hunt Stevens, founder and CEO of WeSpire, a firm that helps companies with employee engagement. “There’s a reason only 30 percent of the U.S. workforce is engaged at work and it’s because engaging people in general is really hard, then you have to engage them in some programs that are seen as ‘nice to have,’ not ‘have to have.’”

Companies starting the journey are learning ways to make it happen. Paloma Lopez, global sustainability director for Kellogg Co., says any statement of larger purpose has to be embedded in the company’s strategy or it won’t produce results. For Kellogg this involves looking for ways to feed more people around the world and promoting sustainable farming.

“Purpose isn’t about having a team of CSR or HR champions,” she said. “This is about everyone coming together and making something big happen. If it’s not integrated, purpose is not going to be quite there. Make it as experiential as possible, accessible as possible, and meaningful as possible.”

Cascade Engineering in western Michigan is a pioneer in positive business practices, values set in the company’s culture by Founder and Chairman Fred Keller. The manufacturing company focuses on environmental stewardship and employee well-being. It spent years developing successful programs to provide jobs to former welfare recipients and ex-convicts. It’s also not afraid to try to tackle the big issues in society, like racism.

From skeptic to believer

“Business solving society’s issues? How does that work?” he said. “Then I asked, ‘what does that cost?’” The son of a Detroit police officer, he was well familiar with the problems of society, but didn’t see them as his problems.

Then he started working with Cascade and Keller, seeing the success of environmental stewardship and employee well-being. A turning point came when he decided not to invest in an electroplating operation for chrome components as a customer requested. Miller didn’t want to bring the caustic process to Cascade’s home.

Instead Cascade put resources into a cleaner alternative and plans to disrupt the electroplating industry.

“A business cannot outperform an unhealthy ecosystem for any period of time,” Miller said. “Our purpose is to try to ensure a healthy ecosystem in the future. From my perspective, it’s not only the right thing and the smart thing, but it’s the future of capitalism.”