We can take steps to help diversity initiatives be effective—and not have unintended consequences.

Facebook publishes an annual diversity report—a way to catalog the efforts the company is making toward diversifying its staff, and to report on its progress. They’re not alone; many other companies, both in the technology world and beyond, are implementing similar initiatives. And yet each year, the results seem underwhelming. 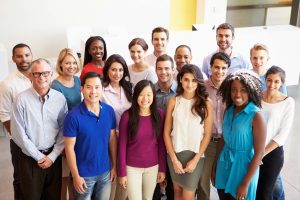 Diversity initiatives are policies and practices designed to improve the workplace experiences and outcomes of target group members. These initiatives most often target women and ethnic or racial minorities, but they can target any group who faces pervasive disadvantage in the broader society. They might include non-discrimination policies (like emphasizing merit as the basis for pay and promotions, or training employees in implicit bias), programs that support target groups (like diversity mentoring programs), or accountability practices (like hiring a chief diversity officer or implementing a reporting system for discrimination).

While this sounds straightforward, research suggests that these initiatives often don’t work like they’re supposed to. For example, studies have found that a variety of diversity initiatives—including evaluating managers based on diversity and inclusion metrics, and diversity networking and affinity groups—can lead to either more or less representation of target groups.

These surprising, complex findings motivated me to research why diversity initiatives don’t always work as intended, and what we can do to try to make them more effective.

The unintended consequences of diversity initiatives

Organizations are complicated places made up of individuals who interact with one another in complicated ways—and don’t always act the way we’d expect. Even when leaders have good intentions for implementing diversity initiatives, they can produce several different kinds of unintended consequences.

1. Backfiring. This is when a diversity initiative has an undesirable effect on the intended outcome, like when the program decreases representation or increases discrimination. A likely cause of backfiring is the implicit signal that target groups need help to succeed. Because diversity initiatives are supposed to help target group members, some people infer that target group members might not be able to succeed on their own. And this is problematic because it can lead to stereotyping and discrimination.

2. Negative spillover. This is when diversity initiatives have an undesirable effect on something other than the intended outcome. For example, diversity initiatives may result in negative attitudes among non-target group members. The root cause of this reaction may be the signal that targets are likely to succeed in the organization.

Unlike the first message—that targets need help to succeed—this is a message that leaders probably want to send when they implement a diversity initiative. After all, if targets are seen as more likely to succeed, they’re probably going to be more attracted to the organization. But it can also lead to some perceived unfairness among members of non-target groups, such as whites and men.

This is because people tend to perceive intergroup relations as a zero-sum game. If people believe that minorities’ experiences are improving in an organization, they will make the inference that things are getting harder for majority group members. They see that as unfair, and ultimately this leads to a lack of engagement. They form negative attitudes toward the organization because they feel the organization is treating them unfairly.

3. False progress. This is when a diversity initiative has the desired effect on the intended outcome—when the diversity numbers improve, so it looks like things are getting better—but that improvement is not accompanied by true underlying change.

There have been some anecdotal accounts about ways this might happen. For example, people have speculated that in order to improve the diversity numbers, a manager might take a non-managerial job held by a lot of women or minorities, and just reclassify it as a managerial job. It looks like the representation in managerial positions has gone up, but nothing has actually changed.

A likely cause of false progress is the signal that diversity goals are valued by organizational leaders. People believe the organization cares about diversity, and that managers will be rewarded for fostering it, but then they become motivated by extrinsic incentives rather than an intrinsic belief in it. In other words, it motivates people to take shortcuts.

In a 2017 study, my colleagues and I found some evidence of how subtle these unintended consequences can be. We found that in organizations with diversity initiatives, the small subset of women who were deemed “high potential” earned more than high-potential men, all else being equal. This seemed to be because managers saw high-potential women as particularly valuable for advancing the organization’s diversity goals, since women are very underrepresented at the executive level, and thus paid them more. Alternatively, the majority of women, who were not deemed high-potential, did not benefit from the diversity initiatives and instead continued to receive a pay penalty.

A lot of research focuses on which types of diversity practices are the best for organizations to implement. But everything we’ve learned about unintended consequences suggests that we need to pay attention to the signals, messages, and interpretations behind these programs.

On one hand, that is challenging, because invisible messages can be difficult to combat. But it also creates an opportunity for leaders to take control of the messaging, to be thoughtful about how they talk about and justify diversity initiatives.

My newest project started to investigate what kinds of messages and rhetoric are most helpful to diversity initiatives. My coauthors and I came up with three broad types of rhetoric leaders might use when talking about diversity:

These findings suggest that leaders tend to like “diversity is good” rhetoric. This is the most common way they talk about diversity in organizations. But simultaneously acknowledging both the value and the difficulties of diversity seems to be more effective.

Why? If you make an argument and mention the downsides of your point of view, you’re seen as more credible. You’re also saying something that is unexpected, so people are apt to pay more attention. Research on “refutational” messages suggests that it’s particularly effective to communicate that something has upsides and downsides, but that the upsides outweigh the downsides. Similarly, “diversity is good, but also really hard” says that diversity is valuable but difficult—and if you’re willing to work through those challenges, you’ll reap meaningful benefits.

In addition to being more persuasive, this approach is consistent with reality. Comprehensive reviews of how diversity affects team performance have found zero effects—and not because diversity makes no difference. It’s because, sometimes, diversity can be harmful. People who are different from one another have trouble getting along, and they experience conflict and tension that hurts the team’s performance. Other times, diversity is a boon: You’re exposing people to different perspectives, they are more innovative, they make better decisions, and organizational performance improves.

To achieve these good outcomes, it takes hard work—and certain conditions to be in place. From research on diversity, we understand what that hard work entails:

Deep down, a lot of us know this. This is our reality. I think we should not be afraid to admit that diversity is both good and hard. That’s not only a more realistic picture of the effects of diversity in organizations, but it’s also more likely to take us where we want to go in terms of facilitating more diversity and inclusion.

This essay is adapted from Lisa Leslie’s talk “Are Diversity Initiatives Effective?,” part of the Center for Positive Organization’s Positive Links Speaker Series.