A personal interest in the gig economy’s impacts 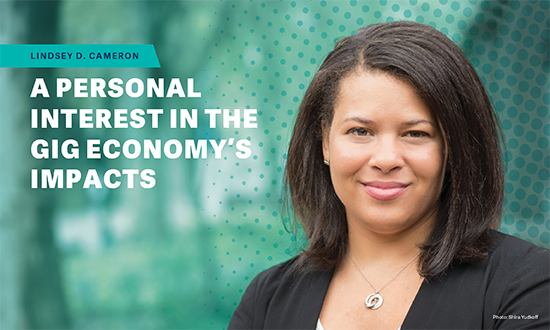 A personal interest in the gig economy’s impacts

“It made me curious about how changes in the modern workplace … affect workers in the gig economy. It’s what led me to study how people interact with algorithms, instead of a supervisor.”

It was hard for Lindsey D. Cameron to watch her mother struggle after being laid off from her job as a manager of a call center, going from one gig job to the next. “She worked really hard at multiple jobs, like stocking groceries and working at concession stands,” Lindsey said.

“It made me curious about how changes in the modern workplace, like algorithms, short-term contracts, and variable pay, affect workers in the gig economy. It’s what led me to study how people interact with algorithms, instead of a supervisor. Algorithms are the glue of gig work: from hiring and firing, to evaluation of work, and how people are paid,” Lindsey explained.

This research is important because numerous forecasts show that nearly half of U.S. occupations are at risk of automation in the next 15 years and at least 70% will require some interaction with digital technology.

Lindsey uses the lens of Positive Organizational Scholarship (POS) to focus her research on the human side of algorithms. “The core theme of my work is that algorithms don’t exist in a vacuum. Humans write them. There’s no getting away from the human element of work no matter how technically efficient we’re getting.”

Lindsey’s initial research focused on the largest employer in the gig economy, the ride-hailing industry, which she experienced first-hand as a driver for three years. She studied the role of algorithms in managerial control and why people comply with or break the rules. “It’s so counterintuitive, but I found that people still feel autonomous even though they are being managed by an algorithm. They find a sense of freedom without having co-workers or direct contact with a manager,” she said.

Thanks to her exposure to POS, the Center for Positive Organizations (CPO), and Michigan Ross, Lindsey has been able to take on ambitious projects. “I’m grateful that I’ve been allowed to think big and swing for the fences,” she said. She plans to stay connected to CPO to pay homage to the special place where the seed of her POS interest was planted. “If you care about the world, you care about POS. It’s just that simple.”

Lindsey D. Cameron is an assistant professor of management for the Wharton School at the University of Pennsylvania and a faculty affiliate of the Center for Positive Organizations. She received her PhD from Michigan Ross in spring 2020.

This story and others appear in the Center for Positive Organizations 2020 Impact Report.