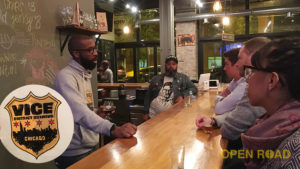 In our second week of Ross Open Road, we had a short drive from Detroit to Chicago to work with Vice District Brewing Company, a black-owned microbrewery located in the South Loop neighborhood of the city.

Co-founders Curtis and Quintin (who goes by Q) started the brewery in 2014 when their passion for homebrewing outgrew their basements. The company is growing, and VDBC is opening a second, larger facility in Homewood, IL.

With less than ten black-owned breweries in the nation, Vice District Brewing is providing a space for diversity and accessibility in an industry that has yet to expand its reach.

Our team arrived excited to support VDBC by recommending a distribution strategy for the new production facility. As planned, we learned a great deal about the industry, but more surprisingly, we learned via observation about subjects not easily addressed in the classroom: organizational culture and community impact. Those learnings came to peak on Thursday, our last full day with the team.

Having spent our days working in the taproom, the space had become familiar. The dog-friendly front room is small, but well designed and comfortable, with long wood picnic-style tab 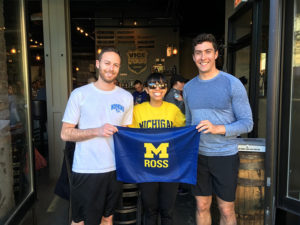 les, a big bar, and artwork paying homage to Chicago scattered throughout. Antwan, a bartender and a cousin of Q, greets our team having remembered us from earlier in the week. We get to work finalizing our deliverables in anticipation of the night’s social events.

3/4 of Team RAZA at Vice District Brewing in Chicago

The staff rolls in around 3p.m., and the two women join Antwan behind the bar and we introduce ourselves. Soon after, a film crew knocks on the door. Vice District Brewing Co. is being featured in a statewide campaign, “Illinois Made,” and it’s time to record their segment. The film crew hangs out after the interview, more customers arrive, and the atmosphere kicks in.

Music bounces between Erykah Badu, Semisonic, and Waka Flocka Flame, and people seem to enjoy it all. By 6p.m., the place is full. In the front, a group is dressed in running shorts and sneakers. Thursday is a meet-up day for the Vice District Run Club, and our team is ready to join the four-mile jog to the Loop. In the back, there is a group of electrophysiologists in professional attire taking up two tables. They’re in town for a conference and chose Vice as the location for a post-conference breakout session. Our team finishes an outing with the run club and wraps up the night with Curtis and Q reflecting on the week over a beer, of course.

Our week with Vice was smooth, the learnings were subtle, and we realized that Vice is making an impact in a similar fashion. Curtis and Q are modest when sharing the mission of VDBC. There is no tagline or banner, yet the taproom is undoubtedly a place that is building community.

We observed VDBC create connections in more ways than we had anticipated.

The taproom itself bridges a geographical divide between North Chicago and the South Side. Living on the Southside used to mean long trip to somewhere North of the Loop for any craft beer experience. Vice closed that gap when they chose the location in South Loop.

The demographically diverse staff is an apparent representation of the mission to include women and underrepresented minorities into the craft beer space. Finally, the price point and everyday language creates accessibility for those new to craft beer. For less than $10 a pint, a customer can experience a bitter beer of their choosing without the intimidation of knowing beer-specific vocabulary such as hops, malts, and esters.

In the end, our time at Vice District challenged our understanding of business for impact. Where our first week with Merit Goodness exposed us to a model that had clear ties to an explicit impact-driven mission, this week we recognized the seemingly residual impact of a for-profit business.

Beyond beer, the taproom facilitates connections through conversation, an activity that transcends industry, income, race, and gender. Overall, the cultural learnings of this week reinforced the importance small businesses play in creating community and fostering local interaction.

This article was originally published in Ross Student Voices Blog