How can the concept of resilience be applied to atonement between victims of crime and perpetrators of crime? Last week, I visited a class at the University of Michigan in Ann Arbor called The Atonement Project where we discussed that very question.

The class is the brainchild of Shaka Senghor, and he has worked with The University of Michigan and the MIT Media Lab to make his dream a reality.  As he recounts in this TedX Midwest lecture, Shaka was incarcerated as a teenager for taking someone’s life in a drug deal. How did he become so hardened that he pulled the trigger during a fight? How did his dreams of become a doctor go awry on the streets of Detroit? How did he turn his life around and become a proponent of atonement? As Shaka explains, no person should ever be considered beyond recovery or rehabilitation. As he tells in his memoir, Writing my Wrongs, for Shaka, uncovering his pain and learning to atone for his mistakes came through reading and writing.

Along with my dear friend Professor Ashley Lucas, Shaka guides 16 students at the University of Michigan in a class on The Atonement Project. Ashley has been visiting prisons for the last 20 years to see her father. And she has written a play based on interviews she did with family members of incarcerated persons called Doin’ Time: Through the Visiting Glass. She has done countless creative arts workshops inside prisons. And he has co-authored a book on women prisoners, Razor Wire Women. 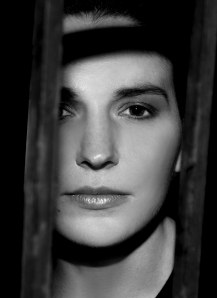 Through their class, Ashley and Shaka reach out of their own pain to students who are willing to reach out to prisoners, their families, and victims of crime. The students go out in groups of two or three either into prisons or into communities affected by violence and crime and run creative arts workshops—painting, literature or theater. Their goal is to re-humanize people whose humanity has been harmed. Their energy and commitment was a tremendous inspiration to me. My last words to the students was that their work is a witness to a world that wants to shut itself off from other people’s pain.

I shared with the students about my own research among Haitian immigrants, and my recent research on young adults who have had traumatic life experiences. I asked them to read my favorite article on resilience, Chapter 1 of the Handbook of Adult Resilience, called “Resilience: A New Definition of Health for People and Communities,” by Alex J. Zautra, John Stuart Hall, and Kate E. Murray. I also assigned a blog by positive psychologist Robert E. Quinn where he answers a prisoner’s question about how focusing on the good can help his life that has been so full of bad.

Here are some students’ comments about the reading and discussion.

“I must have underestimated the human capacity to make something bad into something good. What stuck with me about our conversation about resilience is the universality of it. From Professor Mooney’s work in Haiti to our work in Michigan prisons, it is clear that human beings do not need to be ‘psychological superheros’ to respond to hardship with transformation. Hearing her speak about community and individual resilience restored my sense of purpose in regards to the Atonement Project. If I can convince people to hold on to hope through creation (art, theater, writing), I will have done my job well.”

“I really appreciated learning that from her [Margarita Mooney’s] numerous interviews with victims of violence or poverty, that it is often people who have less or people in non-Western cultures who are more accepting of people’s suffering and help build resilience as a community.”

“The first question I asked in regards to resilience is about its opposite effect. Might resilience be a bad thing, I thought? Why should people be happy about adapting to traumatic situations? After we discussed the notion of ‘hope’ with regards to resilience, I realized I was talking about something else. My concerns are regarding what is called ‘learned helplessness’ and that is different than resilience… Without this hope as a positive outcome, a person would always stay stuck in the box of suffering which becomes a defeatable attitude. Professor Mooney said that she is amazed how material hope is. That makes good sense to me.”

Wonderful! Martin Seligman would be proud that you know what learned helplessness is and how it differs from resilience.

“Recently I’ve been thinking about expectations of resilience, especially in terms of our interactions with people who have experienced trauma. I think it’s important to look for the little signs of resilience, in lieu of expecting great gestures. A smile, a willingness to talk about one’s challenges, positive social interactions, embracing one’s emotions (be they sad, angry, happy), empathy—these to me are the subtle signifiers of the resilient.”

“I think resilience is a highly relevant skill to have, not only in our own Atonement Project but also in much of life. Previously, I had thought resilience was just the ability to ‘bounce back’, but upon our class discussion with Margarita Mooney, I have learned it encompasses much more than that. We discussed and read about how resilience is often incorporated into entire communities, not just within the self…I remember reading before class that resilience takes into account our vast range of emotions/experiences, not just a lack of negative and a desire for positive outcomes.”

So glad you now have higher expectations that bouncing back!

“Resilience applies to my work with the Atonement Project because the two exist simultaneously. Both resilience and atonement require an acknowledgement of the situation, the pain and suffering and adversity that you are going through, or that you have inflicted upon another, of interior self-reflection. They work in a very cool circular relationship. Atonement is both an act of resilience, as well as a step towards resilience. It goes beyond the idea of just getting by in the face of adversity. Resilience is an act of taking life into your own hands.”

Yes, reflection is key to both atonement and resilience. Brilliant!

“Margarita’s discussion on resilience was eye-opening. The point that she mentioned that struck me the most was the way the United States learned to only desire the good emotions, while desiring to completely eliminate the bad ones. However, if there is any lesson that I learned here, it is that resilience—this notion of seeing the good through the bad—is so incredibly essential to human connection.”

Absolutely. Connection to other human beings requires a willingness to share their pain, not ignore it.

Resilience is not forgetting but transforming. Well put.

“I learned that resilience comes in different forms of manifestations. Whether you are resilient depends on your environment, personality, etc. Being resilient doesn’t mean simply getting back to ground zero, but rather continuing to move along and grow and prosper in your life. The talk left me uneasy about the line between what role mental illness/depression/drug addiction plays in resilience. I am continually astounded by the resilient people who surround me every day. It makes me believe that the human psyche is capable of anything.”

Thank you. We should keep talking about mental illness/depression/drug addiction and resilience.

“I learned how expansive the process of resilience is. Not only is it overcoming one’s trauma but it also means sustaining that positive outlook and going beyond just getting past an event. I want to bring this into the Atonement Project by encouraging a goal-setting mindset. Goals, a positive future, maintain and sustain this resilience. Getting over what landed you in prison is not enough. It is necessary for you, who you’ve hurt, and your community to ‘get over it’, come to terms about it TOGETHER and set goals to sustain this positive approach.”

Resilience only occurs with others. TOGETHER. Amen.

“The idea of resilience as a forward momentum, as an affective engagement into the future, is a concept I will take with me not only into the prison workshop but throughout my life. I will honor the challenges and struggles I’ve faced as opportunities for developing new capacities, not merely as set-backs.”

Keep moving forward, and let those setbacks make you stronger!

Resilience is difficult and rewarding indeed. Preparing a talk on resilience and atonement was challenging for me, but as you can see from these comments, it was extremely rewarding. Thank you for your inspiration and witness.

Margarita Mooney is an Associate Research Scientist in the Department of Sociology at Yale University. Her areas of interest include religion, culture, immigration and economic sociology. Her book Faith Makes Us Live: Surviving and Thriving in the Haitian Diaspora was published by University of California Press in 2009.