The reason I am involved in the Center for Positive Organizations is because of Chris Peterson. I signed up for his Positive Psychology[1] course at the last minute, and unexpectedly it became the most personally meaningful class I’ve ever taken. On the day of our midterm, though, Chris passed away unexpectedly, which was devastating to the class. Despite the tragedy we all experienced, I’m so fortunate to have known Chris as long as I did. Every day he shared genuine kindness, and not only did he teach us how to live more positive and fulfilling lives, but demonstrated his lessons daily.

Rather than studying what goes wrong with humans, as most psychology does, he focused on what goes right. His most renowned research identifies a series of character strengths and virtues that have been discovered universally to be morally good[2]. His findings include six virtues–wisdom, courage, love, justice, temperance and transcendence–that are defined by the processes that he calls “character strengths.” His close friend, colleague, and co-author of his character strengths book, Dr. Marty Seligman, eloquently spoke at the First Annual Christopher Peterson Memorial Lecture[3], outlining Peterson’s “Unfinished Masterwork.” Before Peterson died, he was working on a theory that even Seligman found “much too hard,” but he made an impressive start that absolutely fascinated me.

The DSM-V (Diagnostic and Statistical Manual of Mental Disorders, 5th edition) largely focuses on symptoms. In order to medically diagnose someone with a mental health disorder, they must display 5 of the 9 exact symptoms listed. In a practical sense, not everyone fits the clear-cut lines of what defines a specific symptom or syndrome, and this is a negative and pathological perspective. However, Peterson used his character strengths work to outline a positive model to complement the DSM-V that is more universal, systematic and theory-based.

The chart below[4] includes his identified character virtues and strengths on the left, along with columns for the opposite, the absence, and the excess of the strengths successively. The items in the latter 3 columns make up an alternative to what the DSM-V currently lists, which Seligman calls, “the Peterson Pathologies” and refers to as, “the real mental illnesses.” Additionally, in order to treat the disease, rather than focusing on fixing the problem (the current pathological approach), he suggests that they work on fostering the strength (a strength-based approach[5]).

This concept has profound implications for how our attitudes towards people with mental illnesses form. The current symptom-based diagnostic system reinforces the negative way we view disorders and the people who have them. Rather than focusing on the negative, Peterson emphasized the importance of recognizing other people’s strengths. His life philosophy was to value our relationships with others above all else, for those provide the greatest source of happiness. Even if nobody is able to finish his research in the way he would have, at least we can take away the message to put effort into the relationships that we value and to focus on the good in people. 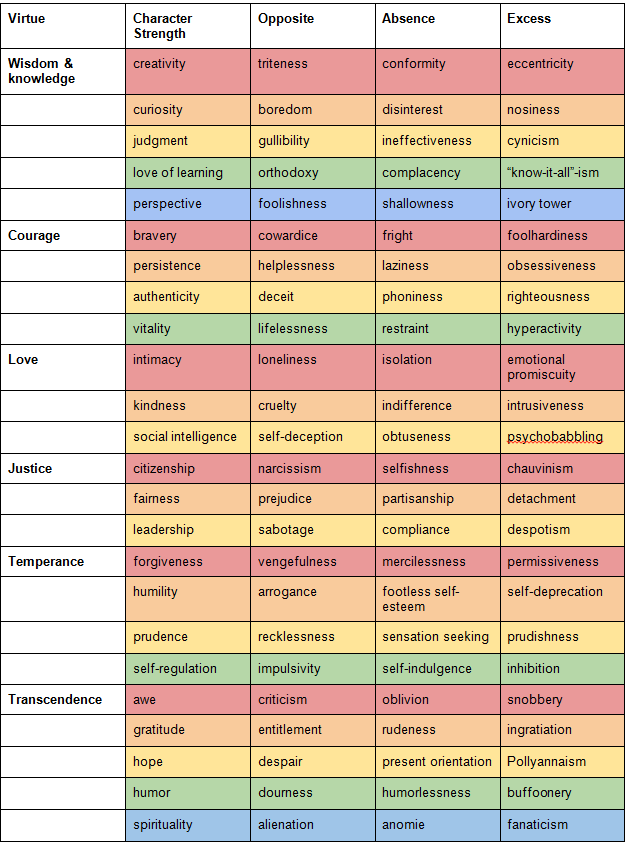 [3] A recording of the lecture can be accessed at: http://www.youtube.com/watch?v=Qy1uBePD_sA

[4] Seligman refers to the chart as “unfinished” because not all of the terms fit perfectly yet. The chart was adapted from the YouTube link.

[5] Strengths-based approaches are also highlighted in the Reflected Best Self Exercise: https://positiveorgs.bus.umich.edu/cpo-tools/reflected-best-self-exercise-2nd-edition/