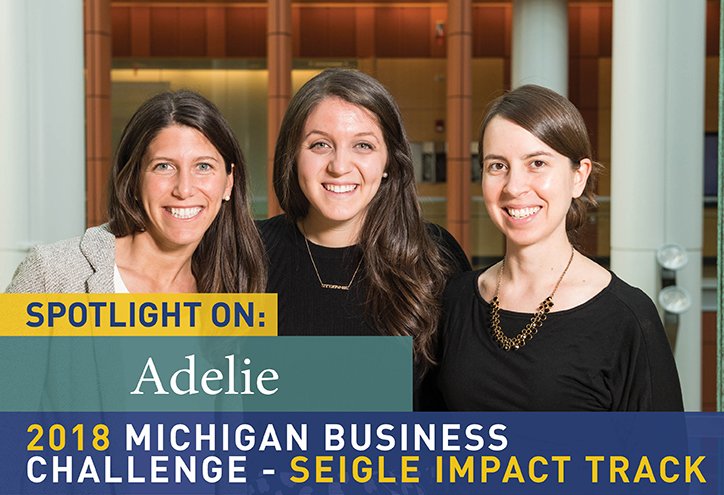 After months of preparation and training leading up to the finals on Friday February 16, Clot Buster – a startup developing a medical device to safely and rapidly remove clots for stroke treatment – has been named the overall winner of the 2018 Michigan Business Challenge. As the recipient of the Pryor-Hale Award for Best Business, Clot Buster will use its $25,000 prize to finalize development of its device and complete safety and efficacy testing.

“Prior to competing in the Michigan Business Challenge, we had a solid proof of concept for our device but didn’t know what it would take to bring it to market,” said Yang Liu (PhD ’19), founder of Clot Buster. “Through each round of the competition, the Zell Lurie team and judges provided valuable feedback, which helped us refine our business plan and pitch. We now feel confident in our product and business development roadmap and are more determined than ever to bring Clot Buster to market and save millions of lives from stroke.”

The idea for Clot Buster stemmed from the earlier collaborative efforts of Luis Savastano, MD, Professor Aditya Pandey of the Department of Neurosurgery, Yang Liu (PhD ’19), Yihao Zheng (PhD ’16), Jeffrey Plott (PhD ’17), Joshua Cockrum (BS ’16) and Professor Albert Shih of Mechanical Engineering at the University of Michigan. Clot Buster is also supported by The University of Michigan’s Coulter Translational Research Program. The team’s varying backgrounds in neurosurgery, biomedical machining, engineering and medical device commercialization have led to the creation of a truly unique device for the treatment of stroke, and ultimately contributed to the team’s overall success.

“Tech-enabled startups seemed to stand out to the judges this year, especially those with applications in health care,” said Stewart Thornhill, executive director of the Zell Lurie Institute. “I’m continually impressed by the caliber of teams that come out to compete year after year, and with the innovative ideas and technologies they’ve presented. The Michigan Business Challenge has armed each new generation of University of Michigan entrepreneurs with the financial resources and feedback needed to take their ventures to the next level. It exemplifies what we hope to achieve with each course and program designed and offered by the Institute, providing students with enriching, hands-on learning experiences that have real world applications.”

Clot Buster is preparing to bring its device to venture capitalists in the coming year, with the goal of securing additional funding to advance to the clinical trial stage and earn FDA approval.

Including the $25,000 Pryor Hale Award given to Clot Buster, more than $100,000 was awarded to student teams participating in this year’s Michigan Business Challenge, hosted by the Samuel Zell & Robert H. Lurie Institute for Entrepreneurial Studies.

Another medical device startup that impressed this year’s judges is MedKairos Inc., which is developing a platform to test and verify the quality of tissue collected during biopsies. Cofounders Michael Moore (MD ’21) and Andy Kozminski (MSE ’19, MD ’20) received the Pryor-Hale Runner-Up Award and its $10,000 prize, as well as one of the two Outstanding Presentation awards ($2,000) for their ability to respond to questions from the judges and overall presentation style. Like Clot Buster, MedKairos is on the quest to obtain FDA approval with aggressive plans for navigating regulatory clearance and defining the scope of its beta trial studies. The team recently competed in the Cardinal Challenge, the University of Louisville’s annual business plan competition, and has plans to attend other intercollegiate competitions in the year ahead. MedKairos is currently partnering with Michigan Medicine and the Cleveland Clinic for software validation.

Joining Clot Buster and MedKairos in the final round, each earning a $2,500 finalist award, were:

Teams with businesses that pursue a mission-driven goal were selected in the challenge’s first round to compete in the Seigle Impact Track, sponsored by the Mark and Robin Seigle Entrepreneurial Innovation Fund. This year, cofounders Adam Hokin (BBA ’19) and Anna Moreira Bianchi (MBA ’19) took home the first prize of $15,000 in the Impact Track for their company PedalCell, which creates novel bike-powered phone chargers for the bike share industry, creating engaging rider experiences while getting cars off the road. They also received a $2,000 Outstanding Presentation Award.

The other Impact Track winners include:

This year’s competition debuted a new prize to honor the team that incorporates positive business practices into their business plan and the company’s core values: the Small Giants Positive Organizing Award, sponsored by Small Giants Community and the Center for Positive Organizations. This prize was given to Stef Rubinstein (MBA ’19), Tracy Wolfbiss (MBA ’19) and Vanessa Lynskey (MBA ’19) for their company Adelie, which is a digital platform that seamlessly manages parental leave for expectant mothers and fathers, reducing the stress and emotional burden placed disproportionately on women. The team also took fourth place in the Siegle Impact Track and received the MBC Showcase Award, decided by popular audience vote, taking home a total of $3,750.

Other teams recognized with special honors in the 2018 Michigan Business Challenge included:

For 35 years, the Pryor-Hale Award has helped advance the development of student startups

The Michigan Business Challenge guides student entrepreneurs through new venture creation in a multi-phase business development and planning process. Open to all current undergraduate and graduate students from across the University of Michigan Ann Arbor campus, proposed businesses may be for-profit or non-profit, and offer products or services to either consumer or industrial markets.

Over the last several decades, alumni startups that have placed well in the Michigan Business Challenge have gone on to:

To learn more about the Michigan Business Challenge, teams that participated in this year’s competition or the prizes awarded, visit www.zli.umich.edu/programs-funds/michigan-business-challenge.

The Institute and its Center for Venture Capital and Private Equity Finance bring together an impactful combination of deep-seated knowledge, enriching experiences and strategic opportunities from the front lines of entrepreneurship and alternative investment. Students’ learning experiences are further enhanced through internships, entrepreneurial clubs, business competitions and campus-wide events that foster valuable networking and engage the business community. The School’s five student-led investment funds, with over $9M under management, immerse students in the entrepreneurial business sourcing, assessment and investment process. Founding Zell Lurie advisory board members include Samuel Zell, chairman of Equity Group Investments, and Eugene Applebaum, founder of Arbor Drugs Inc. For more information, visit the Institute’s website at www.zli.umich.edu.

This article was originally published by the Zell Lurie Institute.