Hope is a Positive Four-Letter Word

“Why are some people resilient when faced with hardships while others get stuck?”

This was the guiding question for the research incubator[1] at the Center led by Margarita Mooney, a Professor of Sociology visiting from Yale University. Professor Mooney shared her most recent research findings on resilience in young adults and led a discussion on the topic. In her presentation, she told the stories of three of her research interviewees, which captivated the room as we all tried to understand the immense challenges and unbelievable pain these individuals had experienced.

Professor Mooney constructed a framework that characterized her interviewees as resilient (implying a forward-moving mindset), coping (a static state of being), or stuck (on a downward slide). It was interesting to hear coping – which I had always believed to be a positive skill – described as a static state. According to Professor Mooney’s findings, to be resilient one must be forward moving, demonstrate coherence in one’s values and actions, as well as be socially engaged and generous. I can’t imagine the incredibly challenging process of achieving this state when faced with unthinkable hardship. 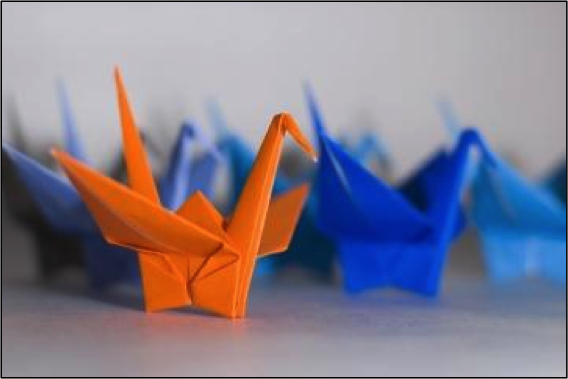 In Japan, there is a legend that anyone who folds 1000 paper cranes will be granted one wish. They are seen as a symbol of hope. (Photo from 1000cranes.com)

As I listened to these stories, I couldn’t help but feel grateful for the blessings in my life that contrasted with the emotional stress and trauma these individuals faced. It also reminded me of the resilience that I have witnessed in others. When I was a teacher in the Bronx, I saw my kids experience pain and sadness in a way I couldn’t imagine as a child. One student in particular, Jonathan, has been in my thoughts a lot this past week, as I’ve been reflecting on this topic.

Jonathan was an incredibly sweet 9-year-old boy who rarely spoke and was not one of the dominant personalities in the class. His quiet, calm demeanor made it even more of a shock when I learned from the school counselor that Jonathan had suicidal thoughts. His father passed away suddenly when he was 5, and Jonathan spoke of wanting to go be with his father in Heaven. My heart broke for Jonathan. Then, one day, the unthinkable happened. I received a call in my classroom that Jonathan’s mother had been hit by a car and killed. He was now an orphan. His family, not knowing how to tell little Jonathan, instead told him his mother had gone to the hospital. They wanted the school to be the one to tell him. Of all the kids in the school, how could this have happened to Jonathan?

I couldn’t contain my sadness in the classroom that day. As I watched this sweet little boy giggle with his classmates while completing his math assignment, I thought to myself that these were the last moments in his life that he knew he had a mother. As we went down to the auditorium for recess, I pulled Jonathan away from the class. We went to a room with the principal, school counselor and all his family. He became instantly nervous. And in the room, we told this little boy that his mother had gone to be with his father. He began to shake and cry. I sat next to him and put my arm around him, not knowing how to console the extraordinary pain he must be experiencing inside.

The next week, Jonathan returned to school. Much to my surprise, my class of students – many suffering pain of their own kind – welcomed Jonathan and turned our classroom into a loving environment for him. He continued to do his work, to smile and to be – from what appeared on the outside – a normal 9 year old. Though, his life had been nothing close to normal.

I don’t know if Jonathan would fall into Professor Mooney’s “resilient” category or not. He might not have been able to move forward in that year, but he was at the very least coping. He was putting one foot in front of the other, not sliding backwards. This boy was and remains an inspiration to me.

On Tuesday in our Foundations of POS course[2], the topic of the lecture given by Professor Oana Branzei was appropriately on the power of hope. We discussed more examples of people who had faced devastating physical challenges, and how hope had propelled them not only to overcome these challenges but to become better people. Professor Oana Branzei taught us that hope, which is the fuel of resilience, is a resource that when tapped can provide tremendous power to individuals and organizations. By believing in our own will and by believing that ways exist, we can achieve the unthinkable.

As managers and leaders in our organizations and societies, it is therefore our job to look for ways to institutionalize and ritualize the practice of hope. In doing so, we can create a renewable resource for organizations that will power resilience in times of difficulty. Hope is contagious. By leveraging its power we not only help ourselves to be more hopeful, but we also help those members, like Jonathan, face their extreme hardships and move forward.

[1] Research Incubators are sessions led by faculty members affiliated with the Center for Positive Organizations to gain feedback on research ideas. Attendees include other faculty members, PhD candidates and other staff at the Center.

[2] As student fellows in the Center for Positive Organizations, we are required to take the Foundations of POS course at the Ross School of Business. Each lecture features a different faculty member who leads a class discussion on his/her area of expertise.