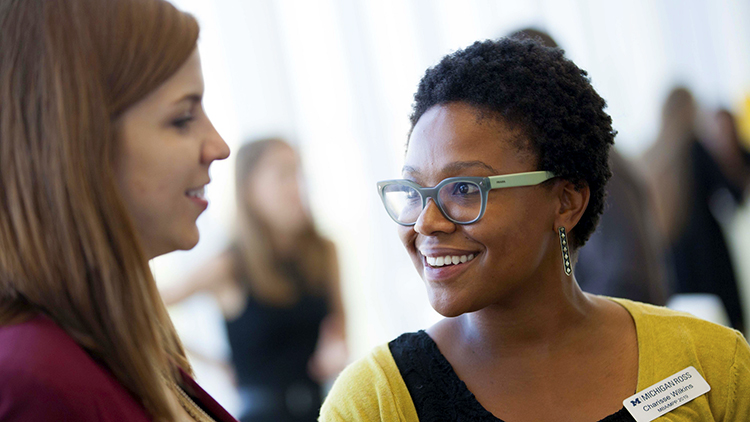 This fall, Michigan Ross welcomed its newest group of MBA students, and it’s the strongest class we’ve ever had. The incoming class has the highest average GMAT score of any class in Michigan Ross’ history.

Another record high for Ross is the percentage of women in the new class: 43 percent.

Strong and smart women are no stranger to Ross — women from our programs have a history of making a difference, from being a founding sponsor of the Forté Foundation, to being named among the most powerful women in banking, technology, and entrepreneurship.

The women entering the class this fall hail from some of the biggest, most impactful companies in the world (Bain, Girls Who Code, Apple, Nielsen, Procter & Gamble, L’Oreal, Google, Amazon, and more), and they stand to make a big impression here at Ross.

Also at Ross this fall, women leaders are presidents of the some of the biggest and most influential student organizations on campus, including +LABBERs Kristen Steagall and Molly Hope:

Interned this summer at BCG in Atlanta
Prior to Ross Sonia worked with Procter & Gamble as a chemical engineer designing Pampers Diapers. As president of the Consulting Club at Ross, Sonia helps members successfully navigate the world of recruiting for consulting careers. It’s one of the largest professional clubs at Ross and works to develop and sustain relationships with the world’s top consulting firms while offering students relevant professional development opportunities.

Interned this summer at McKinsey in Chicago
Kristen had a career in the technology space prior to coming to Ross, working as the B2B Marketing Director for the popular fitness app Classpass. As president of the Technology Club, she is working to build a network of “tech-minded” MBA students, educate them on the latest trends in the industry, and provide support and resources to students as they recruit for jobs in the tech industry.

Interned this summer at William Blair in Chicago
Vaish came to Ross with a background in nonprofit education work, having spent several years as the executive director of the Sunflower County Freedom Project, an organization that hosts after-school programs. At the head of the Finance Club, Vaish supports Ross students interested in a wide variety of finance-related careers — from investment banking to corporate finance. The club takes several trips across the country throughout the year, visiting financial capitals in NYC, Chicago, and San Francisco.

Interned this summer at Tyson Foods in Chicago
Molly served in the US Army for five years as a human resources manager before coming to Ross. As president of the Armed Forces Association, she hopes to advance the role of veterans in business. The club helps veterans with their application to the Ross MBA Program and helps current students network with fellow veterans, Ross alumni, and corporate networks around the globe.

Interned this summer at the George Kaiser Family Foundation in San Francisco
A graduate of Howard University, Charisse came to Ross after three years working with Year Up, a nonprofit organization that works to help low-income young adults move out of poverty and into professional careers. At the head of the Black Business Student Association, Charisse is committed to helping recruit black business students while adding in the professional and academic development of its members.

Interned this summer at Discover Financial Services in Riverwoods, IL
Prior to Ross, Kirsten worked with a law firm in Chicago before deciding to pursue a career change to marketing. Co-leading the Marketing Club with Brian McBee, MBA ‘18, Kirsten will help members gain new skills in marketing and polish their interviewing and networking. With more than 300 active members, Marketing Club is one of the biggest student organizations at Ross.

Interned this summer at McKinsey in New York
Caitlin is at Ross after three years of running her own brand management and marketing consulting firm. While at Ross, she’s continuing to pursue a career in technology and entrepreneurship with the support of ZLI. As co-president of EVC along with Scott Skinner, Caitlin will help other aspiring entrepreneurs at Ross with everything from business plan development and venture funding to networking and more.

This article was originally published in the Ross News Blog