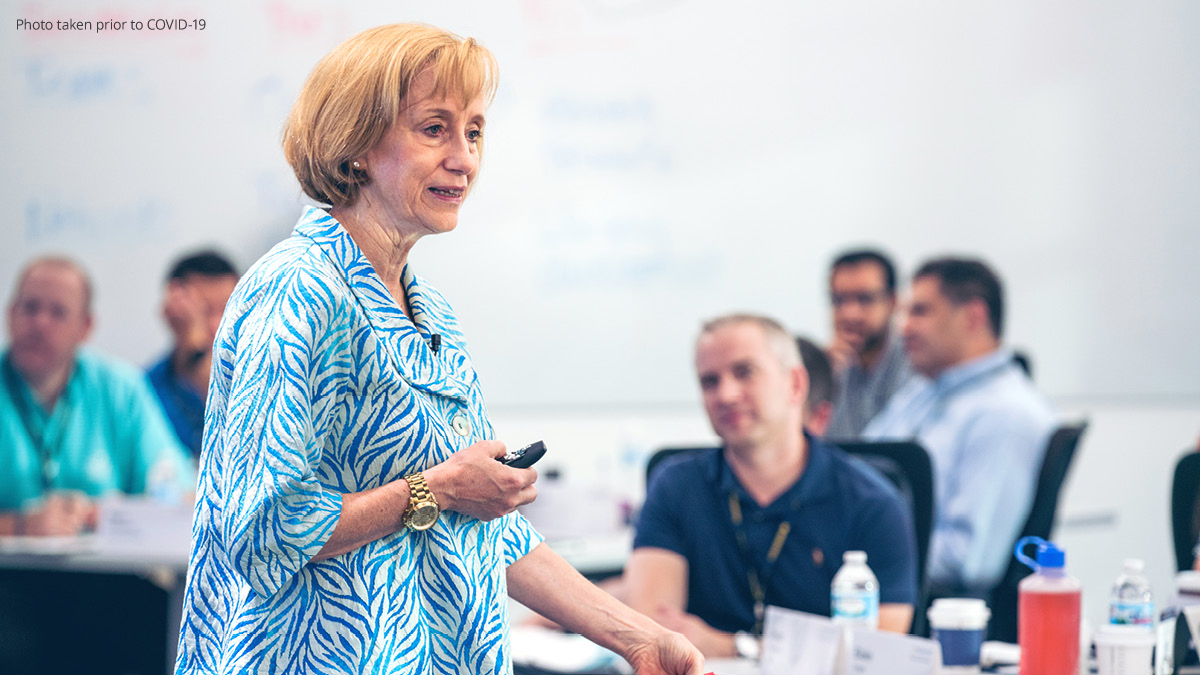 Sue Ashford is the chair of management and organizations at Michigan Ross, and has taught, researched, and written extensively about the subject of leadership. She recently answered a few questions about leading during particularly challenging times.

When facing a time of great challenge and upheaval, how can leaders stay focused on the job at hand, and how can they help their teams do the same?

Ashford: The hallmark of good leadership is that your focus is not on yourself, but on others — your team, your peers, and/or your family. And personally, I have found, somewhat ironically, that focusing on others helps with my stress as well.

No matter what uncertainty you’re feeling, as a leader your role is to help counter the uncertainty that other people are feeling. I can remember times in the business school when things were scary for some reason or another. I emailed the dean expressing my anxiety and he said, “Don’t worry. I’m down here, I’ve got my hand on the tiller.” I think that’s what people need to hear: While we’re freaking out, someone’s got their hand on the tiller. The leadership task is to communicate that you’re on it, you’re moving ahead, you’re planning and being proactive. It creates a container for everyone’s anxiety, and the stronger people feel that container is, the less anxiety they feel.

How do you know what your team needs from you? Is it effective to ask them directly?

Ashford: Sometimes what your team needs is obvious. When things are uncertain, people need reassurance. When people are feeling a lot of pain, they need compassion. These are not rocket science. If you have an “other” orientation, which is one of the hallmarks of really becoming a leader, you’ll probably be tuned into the team enough to know what people need.

The best leaders also make sure that they convey an openness to hearing from their team. When the first person tries to tell you, “We’re suffering,” how you react to that remark is critical. The more you react in a way that demonstrates your interest in what they’re saying, their right to say it, and the validity of their point of view, the more input you’re going to get.

In addition, you probably have a network of connections with people in roles that are similar to yours. By asking them what they are dealing with and what issues are arising in their areas, you can get important insights into your own situation.

Some of the situations leaders have faced recently have been particularly challenging because there’s really no playbook for responding. Are there any particular strategies for such situations?

Ashford: First, pull your team together. Let them know they’re not in this alone. Second, try to understand who the stakeholders are, how they are perceiving things, and what they might need or want. Third, create an action plan, create a backup action plan, and a backup to the backup action plan, because the situation may unfold differently. And finally, recognize that the situation is still not going to unfold exactly as you want — your goal should be to stay nimble.

A recent Harvard Business Review piece that you co-authored with two Ross colleagues explored the idea of using a time of crisis as an opportunity for growth. How can we look for those growth opportunities in times of crisis?

Ashford: A lot is lost in a crisis, but there is that opportunity for gain as well, if you’re thoughtful about it. You have to be very intentional in assessing not only who’s out there and what they need, but also, what could we do differently?

There’s an opportunity, for example, to make changes you’ve always wanted to make. You can use the crisis as rationale and cover to do so.

It’s also a real opportunity to set and reset norms for how your team will interact. A lot of people have done this through their Zoom meetings. Teams have found ways to equalize participation through, for example, the chat and polls so that quiet members are now “heard” more than they might have been previously.

Are there any particular pitfalls to avoid that leaders fall into when things feel like they’re getting out of control?

Ashford: There’s one that’s quite well known, and it actually was a piece written by two of my M&O faculty colleagues when the three of us were doctoral students. They found that when people feel threatened, they become more rigid. They also found that this is true for groups and organizations as well. As you notice a tendency to want to clamp down and have more control, it’s a perfect time to remind yourself that this is a trap and take steps to avoid it.

Are there other strategies that we should be aware of during these times?

This story was originally published by Michigan Ross