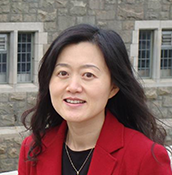 She did her graduate work both in Korea and the USA and has a research and practice background in clinical and school psychology. Her research program most broadly reflects positive psychology. Her main research focuses around a psychology of human strengths and the promotion of positive development and well-being across the life-span in different culture settings. Her research topics include character strengths, moral virtues, positive relationships, life meaning, positive experiences, and strengths-based practice, and their role in resiliency, well-being, health, family, work, and education. Her work in collaboration with the late Christopher Peterson in developing ways to measure character strengths and virtues and studying consequences and ways to cultivate good character across cultures is considered one of the most ambitious undertaking within the field of positive psychology.

Her work has had impacts on research and practices in various settings including education, healthcare, business, and military. She played a major role for the U.S. Army-Soldier resilience and psychological fitness project, the Robert Wood Johnson Foundation-Positive Health project, the Annenberg-Positive Youth Development project, and the Positive Education project in Australia.

She is currently leading the Resilience in Orphans project in South Africa. Her work has been featured in numerous newspapers and popular magazines worldwide including New York Times, Time, Newsweek, U.S. News and World Report, USA Today, PBS, and ABC News.

She has given more than 100 invited lectures and workshops in leading institutions and conferences in 20 nations over 6 continents including China, Japan, Australia, Italy, France, Spain, Switzerland, UAE, Saudi Arabia, Mexico, and Kenya.