Leading to win in a complex world 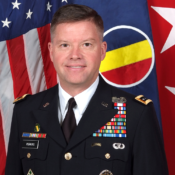 The world is unknown, unpredictable, and constantly changing. Successfully leading organizations today and into the future will be increasingly challenging. How do we lead in that environment and how do we develop leaders who thrive in it? In this presentation, General David Perkins will discuss his philosophy on leadership, his decades of leadership experience, and outline how the Army, and any organization, can grow leaders who thrive in a complex world.

As the Commanding General of the U.S. Army Training and Doctrine Command, General David G. Perkins is responsible for selecting and recruiting every U.S. Army Soldier, training and educating professionals, and designing the future U.S. Army to support National Security.

A graduate of the U.S. Military Academy at West Point in 1980, General Perkins has held numerous senior leadership positions over his career. These include Special Assistant to the Speaker of the House, 104th U.S. Congress; Battalion Commander, leading over 1,000 personnel during Operation Able Sentry in Macedonia; Brigade Commander, leading over 3,000 personnel during the invasion of Iraq in 2003; Executive Assistant to the Vice Chairman of the Joint Chiefs of Staff; and Division Commander, leading over 10,000 personnel during the transition of U.S. Forces from Iraq in 2010-2011. Most recently, from November 2011 to February 2014, General Perkins commanded the U.S. Army’s premier education and leader development institution at Fort Leavenworth, responsible for managing training development and support, developing U.S. Army doctrine, and synchronizing leader development, all of which provides the foundational elements for the U.S. Army to conduct its mission.