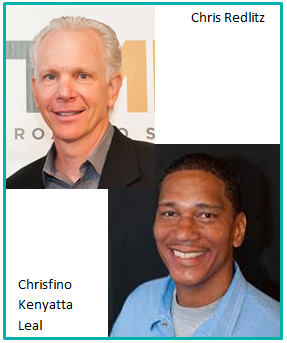 Cofounders Chris Redlitz and Beverly Parenti designed The Last Mile program to train selected participants for eventual employment in a paid internship program within the Silicon Valley technology sector. Through twice-weekly sessions over a six-month period, the program provides information and practical experiences to increase participant knowledge and awareness about the role of social media, build skills in relevant areas for employment in the high-tech sector, including communication, business formation and operations, and foster confidence and a sense of hope that they can succeed as free men.

Chris Redlitz has been on the forefront of emerging technologies since the commercialization of the web. He is the Founding  Partner of KickLabs, a world-renowned technology accelerator, and Transmedia Capital, a seed stage investment fund both based in San Francisco, California. Chris co-founded  AdAuction, the first online media exchange in 1997 which was the precursor to the current auction based and dynamic pricing platforms in online media. Chris co-founded the first online independent yellow pages, OnVillage (acquired by Super Pages), the first online automated coupon platform, launched the first RSS ad campaigns, and helped develop the first peer-to-peer ad delivery system. He received Ad Age’s prestigious i20 award for his accomplishments in the development of interactive marketing and advertising.  Early in his career, Chris held management positions at Reebok International.

In 2010, Chris and his wife Beverly Parenti co-founded The Last Mile program, designed to teach incarcerated men and women fundamental  business skills and entrepreneurial training. The program launched at San Quentin State Prison in California, and it has been a rousing success. The curriculum will include computer programming in the fall of 2013. The Last Mile is the most progressive prison program in the world, and it been covered by every major news service. The program will expand to the Los Angeles County Twin Towers facility in November and several other states in 2014. The Last Mile plans to expand nationally over the next five years, and become the standard for successful reentry in the United States.

Chrisfino Kenyatta Leal spent nearly 19 years incarcerated within the California prison system for possession of a firearm under California’s Three Strikes Law.  Throughout his incarceration, Kenyatta spent his time preparing for his future academically, vocationally, and spiritually.  While incarcerated at San Quentin, Kenyatta was a founding member of The Last Mile, an entrepreneurial program focused on education and successful reentry.  As a member of The Last Mile, Kenyatta was honored as the 2012 Shorty Award Winner for Quora Answer of the Year. Kenyatta also participated in and facilitated The San Quentin TRUST, No More Tears, the Victim Offender Education Group, California Reentry Institute, and many other self-help programs throughout his incarceration. In 2010 Kenyatta earned his Associate of Arts Degree from Patten University and graduated as Class Valedictorian with a 3.95 GPA.

Kenyatta has been a champion of prisoner health education and spent a great deal of his time inside employed by Centerforce as a Peer Health Educator. In that role, Kenyatta facilitated HIV and Hepatitis Prevention classes for thousands of his peers. Since his release, Kenyatta has been working at RocketSpace, a San Francisco based technology accelerator, and continues to serve as an evangelist for The Last Mile.  Go Blue!