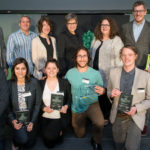 To say that Eric Katz, BBA ‘17 and +LAB alum at the Center for Positive Organizations, is on a winning streak would be putting it mildly.

The co-founder of Kulisha just can’t stop winning competitions, cash prizes, and investments, most recently taking first place and $15,000 in the Wege competition in Grand Rapids, Mich. This is on top of multiple other competition victories and international accolades Katz and his business have already garnered.

So what’s the company that is taking the startup world by storm? Kulisha provides an innovative solution to a growing problem: As the world population increases, so does demand for consumable animal protein. Commercial feeds for livestock are made from small fish, such as anchovies, that are caught and harvested in ways that are harmful to the environment and wholly unsustainable, resulting in more than 90-percent of the world’s fisheries being over-exploited or collapsed.

Kulisha’s solution is simple and plentiful: insects. Kulisha works with food and beverage companies to bring black soldier flies –– which are non-biting, non-buzzing, and non-invasive –– onsite to feed on organic waste, and then the company converts the flies’ waste into commercial feed for livestock.

Katz came up with the idea during an internship with the Quinault Indian Nation in Washington state. He launched the business in Kenya, which is the home of his co-founder, and the company is now in the process of moving to Austin, Texas, to be more accessible to American manufacturers.

Kulisha won the 2016 Thought for Food Global Summit held in Zurich, Switzerland, and the Social Impact Track Grand Prize for the Zell Lurie Institute’s 2016 Michigan Business Challenge. Katz himself has earned plenty of recognition for his work with the company, including being listed as a Forbes “30 Under 30” scholar and Poets & Quants “Best and Brightest” undergraduates.

Kulisha’s success has been greatly bolstered by Michigan Ross and University of Michigan funding sources. Katz recently explained in Poets & Quants that up to half of the company’s seed funding has come from U-M and the Zell Lurie Institute.

This article was originally published in Ross News Blog