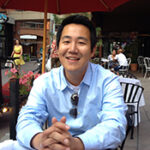 Suntae Kim recently presented his research on an alternative method for incubating business during a crisis to the Adderley Positive Research Incubator, hosted by the Center for Positive Organizations (CPO). The Adderley Positive Research Incubator is designed to foster ideas, insights, and new possibilities arising from a focal researcher’s core ideas in the broad domain of Positive Organizational Scholarship.

CPO co-founder Jane Dutton welcomed dozens of scholars from around the country and around the world to the virtual incubator session, saying: “Suntae Kim is a faculty member at Boston College and a research scholar who’s deeply interested in the emergence processes of new things in adverse contexts. Suntae will share some of the gem ideas in his fantastic dissertation paper that appeared in Administrative Science Quarterly in January under the title ‘Frame Restructuration: The Making of an Alternative Business Incubator amid Detroit’s Crisis.’”

Kim, who earned his PhD in business administration and management at the Stephen M. Ross School of Business, began his presentation by setting the scene of his dissertation research.

“Go back to Detroit in 2013, right around when the city declared the biggest municipal bankruptcy in the nation’s history,” he said. “A group of people gathered in a renovated factory building to talk about addressing the city’s crisis through creating new businesses.”

But there was something different about “GREEN” — a pseudonym for a business incubator he studied — Kim observed.

Its mentors urged participants to overcome the rigid frame of the conventional accelerator model, which they likened to an assembly line, with entrepreneurs going down the line, waiting for investors to pluck them off.

Instead, they encouraged the group to think of each business as a living organism that requires unique care and time to grow.

“Machines can scale. Living organism do not. They grow,” GREEN’s founder told the Detroit group. “We are not going (down) this path where you get a huge loan up front and go bankrupt next year.”

The novel approach created moments of tension, when participants challenged the new, unfamiliar approach. But, these moments were key to justifying GREEN’s novel, pragmatic actions and elaborating its living organism metaphor, which ultimately reframed the problem and generated innovative solutions, Kim said.

“When a participant asked GREEN’s founder why GREEN doesn’t follow a standardized procedure like those in other accelerators, he took the person out to the garden, showing the same kind of trees growing all differently and said, ‘Different living businesses all grow differently and they require different types of care,’” Kim recalled.

“After this moment, GREEN more explicitly customized its incubation process to individual businesses,” Kim said. “Some business ideas took longer than others and, depending on the idea, different aspects of the emerging approach were applied. GREEN’s living business metaphor, more and more variously elaborated over time, led to creation of novel actions that were repeated and gradually established as a diverse but cohesive set of action plans.”

Kim told Adderley Positive Research Incubator participants that the living organism approach to business incubation offers key lessons for innovators in the face of crisis, including:

“By better understanding this process in crisis-ridden Detroit, we may be able to guide similar processes of restoration in other, unprecedented crises,” Kim quoted from his paper.