I’m not a huge fan of surprises, particularly when I’m flying. I’m the guy who bookmarks the flight status page on his phone, only takes carry-on luggage, and still gets to the airport way too early. But on a recent trip home from a conference in Texas, the airport had a surprise in store for me that showed a great example of positive deviance – defined in research by CPO faculty Gretchen Spreitzer and Scott Sonenshein as an intentional behavior that departs from expectations or norms in an honorable way.

When I arrived at the airport, I found out that my flight had been delayed several hours. But as anyone who has flown can attest, this was not the surprise. The surprise lay in how the airport staff handled this delay. In an industry notorious for crying “not it” when it comes to handling inadvertent delays, the Delta gate agents at the Austin (AUS) airport bucked the trend, both in word and deed.

Shortly after announcing the delay, a gate agent came back on the intercom in the boarding area to let us know that they had brought out a drink cart from their supply room, and that anyone in the area should feel free to have a soda or snack. When the same unfortunate gate agent (often the unfair target of traveler ire) had to announce that the delay would be stretched several hours beyond the original estimate, he concluded his announcement with an assurance that, “We will take care of you all, I promise.”

Having heard these announcements too many times before, the reaction in the boarding area was less than optimistic. These suspicions seemed to be confirmed when the gate agent soon grabbed his jacket and radio and left the boarding area. “Must be time to go home, at least for him,” I thought to myself.

Imagine my surprise when the gate agent returned with a stack of about a dozen pizzas! He and his colleagues quickly set up some folding tables, put out the pizza, and invited anyone in the area to come and join them for a pizza party [1]. After our surprise wore off (and lots of cell phone pictures were taken), my fellow passengers and I joined in, and learned that the gate agent had stayed after his shift ended to go pick up the pizza and bring it to us. 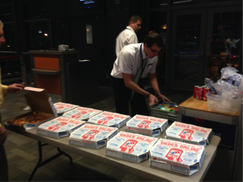 The result of his effort was the calmest group of delayed passengers I had ever seen. I’ve seen people scream at gate agents over a 20-minute delay, yet here we were, four-plus hours after we were supposed to have left, laughing and enjoying pizza.

Though the gate agent left before I was able to catch his name, his actions reflected a great, live-action example of a positively deviant response to adversity.  As noted by CPO faculty Kim Cameron and Bob Quinn in their work on positive leadership, making a positive difference often starts with considering individuals as “whole people,” rather than just participants in a one-dimensional relationship. In this case, the Delta staff could have treated us as just “passengers” – the other end of the air carrier-customer relationship – and only focused on our “passenger” problems.

By this carrier-customer definition, their work would have been done once the new plane was on its way and they had done everything they could to rebook passengers’ connections. Their obligation – get you where you paid to go – would have been addressed, and the gate agents could have gone home.

Instead, these gate agents chose to view passengers as whole people, possessing a variety of desires and needs (hunger, weariness, frustration) beyond just the need to get on the plane and go. By bringing out the drink cart, and later the pizza (both relatively low-cost gestures), the agents communicated a level of understanding, connection, and empathy for the passengers, acknowledging our multiple human needs, rather than just our singular customer needs.

Taking this perspective opened up a variety of different avenues for connecting with and supporting passengers, as the gate agents did, but can often be a hard perspective to see. Indeed, classic research on threat rigidity by CPO faculty Jane Dutton (along with Barry Staw and Ross faculty member Lance Sandelands) suggests that in the face of an unexpected challenge or threat, people can close themselves off and retreat to their well-practiced responses and ways of treating others (in this case, as simply “passengers”). However, particularly after an adverse event, taking this multi-dimensional, “whole person” view is critically important, as it may be the first step to re-forging a positive connection and engendering goodwill.

In the days that followed, I received multiple emails from Delta, apologizing for the delay and actively seeking opinions about how their staff handled the event or could handle it better going forward. Though this feedback seeking is an important part of “closing the loop” and improving (as shown in research by CPO faculty Sue Ashford and others), Delta’s response was all kick-started by the gate agents’ positively deviant reaction to a bad situation.

So next time you are facing an adverse event, take a moment to think: “What are the multiple needs people are facing right now?” Who knows, it might help you find the pizza – not just the plane – that will help turn the challenge into a positive outcome.

[1] In the days following this event, I learned that staff are encouraged to engage in this kind of proactive behavior by Delta, and that similar pizza deliveries have happened at other airports (and even on the runway!) as well: http://www.economist.com/blogs/gulliver/2013/03/runway-delays